How I Learned to Write 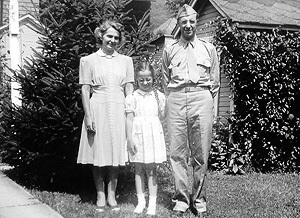 Mummy, Daddy, and me - July 1942
When I was a little girl, my father used to tell me bedtime stories, and that, I believe, is how I learned to make things up.

I didn’t much like kindergarten. I was an only child, wore glasses, and had no idea how to get along with other kids. At Halloween my mother dressed me in a clown suit, and I was put at the tail end of the parade through Miss Keller’s dining room and parlor and into the sunporch that served as our classroom. Leading the parade was pretty, curly-haired Janie, in a pink fairy costume with a little crown and a wand with star at the end of it. I dropped out soon after that.

First grade was also miserable. I hated recess and refused to go outside and play with kids who ran and yelled and threw balls. That was when I learned to read. I don’t remember, but it must not have been a struggle, like learning to ride a two-wheeler or to roller skate. I do remember the books I loved: "Bunny Brown and His Sister Sue," a series about insufferably good children; "The Five Little Peppers and How They Grew," a family that was poor but always happy, no matter what; and the "Uncle Wiggily" series, about an elderly rabbit with rheumatiz and his muskrat housekeeper, Nurse Jane Fuzzy Wuzzy. All of these books had been published long before I was born. Somebody must have given them to me—probably my grandparents, who also gave me a lot of Bibles (Pop-pop Meyer was a Bible salesman.)

I also remember learning to write—that is, to form big, squarish capital letters and then to string them together to form what I believed were words. My mother preserved some of those early attempts. A favorite word was “interrupted,” which I translated as INARAPDAD.

Then, in the middle of first grade, everything changed. We came home from church one Sunday and turned on the Philco radio to listen to the Mormon Tabernacle Choir. It was “inarapdad” by news that upset my parents tremendously: the Japanese had bombed Pearl Harbor. I had no idea what that meant, but six months later my father enlisted in the Air Force and was gone for the next three years.