What Was I Thinking?

When I wrote my last entry eleven days ago I was worried about getting VICTORIA finished. "More about that later," I promised, and now I can't remember what I was thinking.

I've been cruising along at a somewhat leisurely pace with VICTORIA, because I didn't think it was going to be published for another couple of years. But I sent the first 12 chapters, about 80 pages, to Editor Paula before I went to NY a few weeks ago, and it seems the pub date has been moved up. That means the due date for the manuscript has also been moved up. To July 1. JULY FIRST THIS YEAR? YES.

I freaked. Quietly, of course. Because I still have a lot to do to get the word out about CLEOPATRA CONFESSES. And THE WILD QUEEN will be back shortly from copyediting, meaning I'll have to deal with a million little questions. Well, not a million, but a lot. OK, so focus. Get up earlier. Work later. Get it done. Now I'm really worried about getting VICTORIA finished.

Now here's something weird. When I sent those first 12 chapters to Editor Paula, I typed the title on a cover page. I've been thinking of it as VICTORIA RULES, and I really like that title. But instead I typed VICTORIA CONFESSES. "Ha ha," I said. "Dumb mistake." "No No!" everybody said. "It's a brilliant idea! We love it!"

I dunno. Got to think about that. Any comments, you people out there? Read More
3 Comments

I really think that you should keep your original title. It would make more sense because Victoria doesn't really have anything to confess.

I think not Victoria Confesses because that is too close to Cleopatra Confesses, but I think Victoria Rules (which I like) could be a little corny to some people. 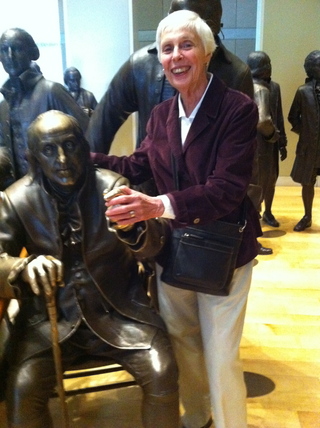 Mr. Franklin and me
After NY I made a side trip to Philadelphia for a Philly Cheesesteak and a visit to the National Constitution Center, where I had a private moment with Ben Franklin in Signers' Hall. All the men who signed the Constitution are represented with wonderful life-size bronze statues. Ben was my favorite.

Now I'm at home with no more travels scheduled and a big push to get VICTORIA finished. More on that later. Read More
2 Comments

Victoria's "birthday" is coming up soon! :)

Like the picture. I just finished "Isabel - Jewel of Castilla", and I recently read "Mary, Bloody Mary", "Beware, Princess Elizabeth", and "Doomed Queen Anne". I <3 your writing. 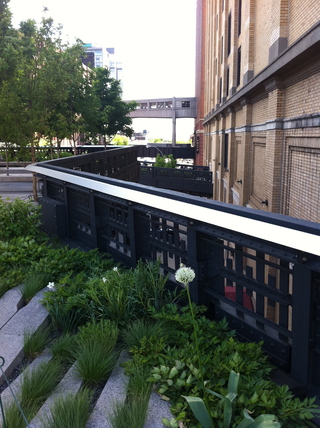 The High Line near the Hudson River
By-product of the trip to Des Moines was bronchitis, which was in full force when I left for a long-planned trip to NYC on May 1st. I coughed all through a meeting about marketing plans for CLEOPATRA CONFESSES; Editor Paula filled me with hot tea so I could record a video for YouTube.

Most interesting meal: at a restaurant called "Mary, Queen of Scots" where I ate salmon kedgerie with Editors Julie and Jeanette. It turned out to be herbed and spiced rice with pea broth (???) and grilled salmon. Very good, but I'll bet my WILD QUEEN never ate anything like it.

Most interesting new NYC spot: the Highline, a long, narrow park that follows an old rail line along the Hudson. Spent a lovely, peaceful hour here. Read More
Be the first to comment