Cleopatra, as I remember her 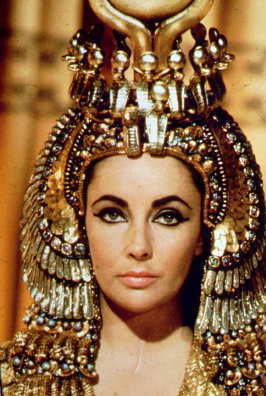 Elizabeth Taylor as Cleopatra
Two years ago I began work on CLEOPATRA CONFESSES. From the start, the only image I could keep in my mind was Elizabeth Taylor as she appeared in a movie made decades ago. I seriously doubt that there was even a passing physical resemblance between the two, but one thing they did have in common was a kind of magic that becomes a legend. Cleopatra had it. So did Elizabeth Taylor.

She led a complicated life. So, too, did Cleopatra, as I learned along the way. Being a legend wasn't easy. It never is. Read More
1 Comments

Kids ask me how old I was when I started writing and when I knew that I wanted to be a writer. In fact I think I always knew, but it took me a long time to figure out how to make it happen. I read a lot when I was young, and I wrote a lot, starting in about 3rd grade; edited the school newspaper and class yearbook; majored in English in college; thought about journalism, flirted with the idea of going into TV but abandoned it because there were scarcely any women working in television in those days, certainly not in important jobs. So I worked as a secretary for awhile, hated it, got married, had a baby, settled down as a housewife, and hated that, too.

When I was 25 I started to write seriously, hours every day. At first everything I submitted was rejected. I persisted. Finally, an acceptance. I kept at it. Had two more children and tried to figure out how to write with kids around, sent them off to sitters, hired teenagers to entertain them. My oldest son later complained that I ignored them. I defended myself: "I was always there when they got home from school." He said, "Yes, but you weren't thinking about us. You were thinking about writing."

Eventually they grew up, and eventually I became an established writer. We all survived, even thrived. There are undoubtedly easier ways to make a life, but I can't think of any that for me would be more satisfying. Read More
Be the first to comment

CLEOPATRA CONFESSES will be published in June, and now I'll make a confession of my own: I really like to do rewrites. I didn't always feel this way. The first time an editor told me that I needed to do some reworking, that the plot sagged in the middle and fell flat at the end, I threw a fit. Politely, of course. And the characters were two-dimensional. What? And maybe I should think about writing it in first person instead of third. By then I was lying on the floor, hyperventilating.

I did eventually pull myself together and tried--reluctantly at first--to follow my editor's suggestions. And to my amazement, the manuscript really did seem better. Now it was perfect, or so I assumed.

Wrong! Could I shorten this, add some description here and here and here, and for goodness sake let the reader know how the main character FEELS?

Oh, lord. So, after a few nights of tossing and turning and several days of obsessing, I run it through again. Much better! But could I do just a teeny bit more?

Now, years later and many books later, I've learned to enjoy the process, even to depend on it. That manuscript I sent in weeks ago wasn't really finished. It was, I discovered, more like a first draft, even though I'd been hovering over it for months. A first draft with still a long way to go, and I might as well make the most of the journey. Read More
1 Comments

Wow, sounds difficult. At our school, we just (for our writing pieces) do a 1st, 2nd, and final draft. And what's good for me is that I am really good at the first try. So, I save a lot of work. I never knew that writing could be that difficult, but I've never wrote a book.