Miss Frankenberry understands that students sometimes need help in preparing book reports. Although Carolyn does love to hear from you and wants you to do well and perhaps even become a great writer someday, she doesn't have time to do your research for you. However, if you ask nicely, she is willing to answer a few questions.

But, before you write to Carolyn, be sure to read My Life, Writer's Journal, and My Books. You'll find the answers to most of your questions there.

Be sure to begin your letter with the salutation: "Dear Ms. Meyer." Tell her where you go to school, what grade you're in, and why you need the information. Ask no more than 2 or 3 questions. Check your spelling! Bad spelling makes Carolyn's teeth ache. Remember to say "please" and "thank you," and end your e-mail with your first name and last initial.

Although Miss Frankenberry can't guarantee that you will get an A on your report, she can promise you that Carolyn will be grateful and will send many happy thoughts in your direction. 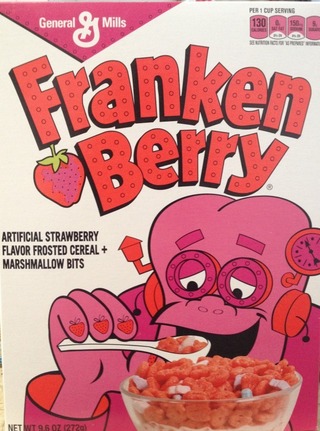 No, this is not her picture. Not even close.

My Miss Frankenberry had no idea a bright pink cereal with fake strawberry flavoring would eventually be named for her. Or maybe it wasn't. Scientists said the food coloring would turn your poop pink.

My Miss Frankenberry, who actually existed, was shaped like a refrigerator (the old fashioned kind with the round thingy on top), and she wore her hair in a braid that went aroundandaroundandaround her head and was nailed in place with LOTS of hairpins.

The REAL Miss Frankenberry was my high school English teacher. She was always hunting grammar mistakes. We called her the Grammar Dragon.

Here is one that always made her breathe fire: THE MISUNDERSTOOD APOSTROPHE

The APOSTROPHE is the little guy that hangs up there between the n and the t in isn't and between the o and the s in Leonardo's.

The APOSTROPHE has two basic missions in life.

Apostrophic Mission #1. Apostrophe takes the place of a missing letter when two words are pushed together to form a CONTRACTION (meaning that something has been squeezed to make it smaller)

Example: he is -- drop the i, push the two words together, and you get he's.

We use these contractions all the time in our speech and in informal writing.


Apostrophic Mission #2. Apostrophe, followed by an s, shows possession: somebody or something possesses something or has something.

And here's the Catastrophic Apostrophic Mistake that makes the Grammar Dragon completely crazy:

mixing up it's and its.


Its, called a possessive pronoun by the Grammar Dragon, doesn't need an apostrophe: The bird is in its cage.

It's is a contraction, a squeezed form of it is: It's not happy in its cage.

Make a Grammar Dragon happy today and learn the difference between it's and its.

(Other possessive pronouns: theirs, yours, hers, his. No apostrophe!)

NOTE to people who think words are fun: apostrophe is a Greek word meaning "turning away." Weird, huh?