Behind the Books: Gideon's People 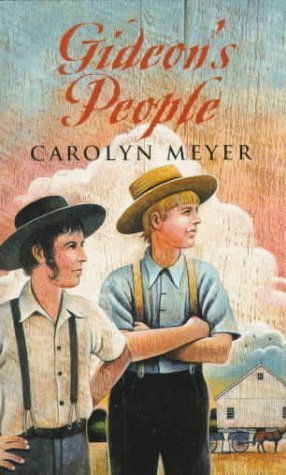 Gideon's People, 1996
One summer in the 1990's I went back to my home town, Lewistown, Pennsylvania, for a visit. I no longer had any family there, my parents both long dead, and everything had changed so much over the decades that I could scarcely find my way around.

Nevertheless, one day I was wandering along Market Street, looking for anything that looked familiar, when I ran into an old family friend. Stanley Siegel had been my mother's lawyer, as his father had been before that. He suggested that we have lunch, and I agreed. I didn't know Stan very well, and I was curious about him and his family. Lewistown was a very small town with lots of German names, mostly "Pennsylvania Dutch"--my grandparents' name was Knepp--and only a small handful of Jewish families. So I asked Stan how his father had ended up there, of all places. And he told me his story.

His grandfather had been driven out of Europe and wound up in Philadelphia, where he became a peddler, traveling to Lancaster County every week with a pack on his back to sell his goods to Amish farmers. Stan's father, Harry Siegel, went with him. It was a good business relationship, Stan told me, because they had a nearly common language--Yiddish and the German dialect spoken by the Amish. They also were deeply religious, although not the same religion. Eventually, Stan's father went to law school, but at that time, many big city law firms didn't hire Jews. So he made his way to central Pennsylvania, to Lewistown, and established his practice there.

I was fascinated by this story, and of course the research was fun, searching for commonalities of which there were a lot. Not one of my most popular books, but one I really enjoyed writing. Read More
Be the first to comment

Behind the Books: Drummers of Jericho

There's nothing like moving to a new city to stir up the creative juices. I had barely gotten settled in Texas when the '90s gulf war forced the return of my stepdaughter, Vered, from her school in Israel. She came to live with her father and me and enrolled in the local high school. It did not go well.

Vered wanted to play her flute in the marching band, but when she learned that the halftime program was based on Christian hymns played while the band marched down the field in the form of a cross, she rebelled and I called the ACLU. All that separation-of-church-and-state stuff didn't seem to apply in Denton. Things went downhill fast, and when the band was barred from performing their halftime program, our girl was targeted. Her life was made miserable. There was one boy--ONE BOY!--who came to her defense. It wasn't enough, and eventually she dropped out.

When I wasn't tearing my hair, I was saving articles from the local paper. The situation made national news, but when it all finally calmed down and life went on, I began to write DRUMMERS OF JERICHO, about a Jewish girl who is vilified, and a church-going boy who has the courage to stick up for her.

There's happy ending. Vered got her GED, graduated from college with a Fine Arts degree, launched a small publishing company in Alaska, and is now in grad school. One thing more: she published my HOTLINE series in e-book form. Read More
Be the first to comment

Behind the Books: Rio Grande Stories

The idea for RIO GRANDE STORIES was conceived in a fit of homesickness. We'd moved from Albuquerque to Denton, Texas, in 1990, and I was missing my old home--the friends, the family, the chile (both red and green), the mountains, the clear blue sky, the beautiful weather, the culture.

One evening, lying on the couch with a magazine that wasn't holding my attention, the idea for a book popped into my head out of nowhere: how about writing a series of linked stories about kids in a middle school in New Mexico who decide to write a series of stories about New Mexico--about La Llorona, and the walk to Chimayo on Good Friday, and Las Posadas on Christmas Eve. They'll write about bizcochitos and Indian pots and jewelry. There will be a dozen stories, and they'll put them into a book and sell copies to raise funds for their school. They'll call their book RIO GRANDE STORIES.

I was on fire with ideas for that book! But actually getting the book written was another thing entirely. My editor ("Archeditor Liz") wouldn't let me get away with any weak characters or second rate plots. I wrote and wrote and rewrote.

I thought it might have just local interest, and it has had that. But to my amazement, there are classes in middle schools from California to Virginia, for goodness sake, where kids are putting together their family stories, using RIO GRANDE STORIES as a model. I've gone to visit them, seen them for myself. It's a great feeling. Read More