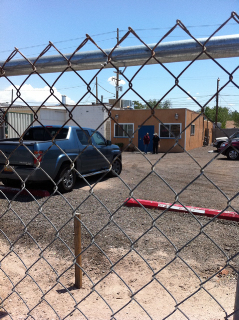 La Mexicana Tortilla Factory, a few blocks from home; factory is in back, tables in front.
I am a dedicated foodie. When I'm not writing or reading, I'm either cooking or thinking about cooking, or thinking about where to get a really interesting meal. Here's my latest find (once we managed to find it!)--and had a really really good lunch today: guacamole, tamales, pinto beans, sopaipilla, iced tea. Waddled home with extra guac and got back to work. Sort of. Read More
Be the first to comment 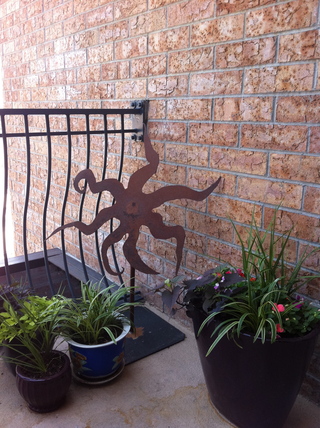 When I was a kid growing up in Pennsylvania, we lived in a double (i.e., two-family) house on the outskirts of town. I spent summer evenings on the front porch, listening to my parents talking with the neighbors until long after the stars came out.

When I left for college, my parents built their dream house. I loved the screened porch, always shady and cool, and I vowed that some day I would have one like it. After college I lived in New York apartments, but when my youngest son was born we moved to an old house in the suburbs and added the screened porch I had dreamed of; it was like a treehouse.

When my life took a new direction, I lived in a succession of houses with a variety of outdoor living spaces: an upstairs balcony in Pennsylvania; a dusty backyard where nothing could grow in Santa Fe; a failed lawn in Albuquerque (nobody in their right mind would plant grass here); a brick patio in Denton, Texas, where I tripped over a hose and knocked out my front teeth; a deck on a Victorian house in Albuquerque with a xeriscaped garden; and now, the last stop, a sixth-floor apartment with two balconies and panoramic views of the Sandia Mountains to the east, extinct volcanoes to the west, and city lights every night.

Fortunately, there's room enough for a container garden with herbs and vines, and in one corner, pictured here, some flowers that have survived this summer's scorching heat. This is where I go to take a break from writing--to water the flowers and to refresh my brain. Read More
1 Comments

I really like your set up here, and I love the plants!

The headline on the Books page of the Albuquerque Journal was great:Cleopatra as a teen, before it all went so wrong. Great interview. Thumbnail picture of the jacket. Info about signings at two local bookstores; the first was Saturday afternoon. I posted flyers around the neighborhood, in coffee shops and at the library; sent out emails to friends; figured out what I'd talk about ("What we DON'T know about Cleopatra"); put on a clean shirt and lipstick; and prayed that at least a few interested people would show up, because it's just so depressing if they don't. (I have done readings with just one person present.)

The folks at Alamosa Books do a terrific job of setting up a reading. On the table with a display of CLEOPATRA CONFESSES and other CM books were (1) a very large stuffed crocodile (2) a stuffed cobra (3) a stuffed leopard. And there were refreshments: baklava, Turkish delight, pomegranate lemonade.

People came! They laughed! They bought books! And I got to bring home the extra baklava. Read More
1 Comments

Do you ever go on a tour for book signing? Carolyn says: I would if invited - but it's a very expensive proposition and publishers don't do many of them any more. 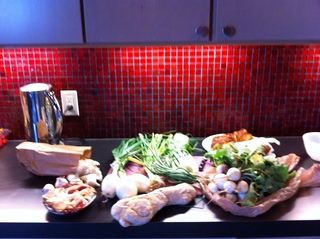 Some of this ended up as breakfast.
I love Saturdays. It's still a writing day, but with a difference. This morning I walked 7 blocks to the Downtown Growers' Market and loaded up on good stuff: onions, oyster mushrooms, bok choi, baby turnips, garlic---and croissants, ciabatti, and a rhubarb pie. Here it is, spread out on the kitchen counter.

even the way you describe grocery shopping is amazing! you are a great author!!!

Today is my birthday. I love birthdays--especially my own. But in reality today is a day like any other. I finally finished going over the copyeditor's notes and changes on the 360-page manuscript of THE WILD QUEEN, Mary Queen of Scots. The CE made a number of corrections, some of which made ME wild. I'm standing fast on some, caving on others. But this puts me further behind on VICTORIA RULES/CONFESSES/WHATEVER.

Meanwhile, I have to stop obsessing about CLEOPATRA CONFESSES. Yesterday was the official pub date, and I hover around amazon.com to see if anybody has posted a review. One did appear today, but with only three stars. THREE STARS?? Why not FIVE?? Because the reviewer, a librarian, loves the book but thinks the book ends too soon and should continue for another 200 pages or so, in order to cover all of Cleopatra's life. But that's not what I set out to do in CLEOPATRA CONFESSES--which was to narrate the Egyptian queen's early life, her formative years, not the entire arc of her life, as interesting as it was.

I've become pretty good about accepting criticism of a work in progress, doing draft after draft if that's what the editor says needs to be done. But once a book is published, I confess that I'm really bad about dealing with negative criticism. I try to ignore it, but I'm no good at that.

Now, as I said, I have to focus on the work at hand, not on what is already done and out there. Besides, it's my birthday! Read More
6 Comments

HAPPY, HAPPY BIRTHDAY!!! I just stumbled in here today - following links. I'm glad I did. I am going to see you have a newsletter.

In case you want a pick-me-up, there are some good reviews on GoodReads.

Happy belated birthday! I'm excited to read CLEO CONFESSES! I'm sure it's fantastic (as are all of the rest of your books).

You were hovering around Amazon waiting for a review? Oh, man...I think that would drive me bats. I've been debating whether or not to leave a review (other than that comment I left on the other's review)...I keep telling myself that, if I'm a true friend (and fellow writer), you won't mind a blunt review. But I haven't been able to apply my fingers to the keys, yet.