Behind the Books: Anastasia, The Last Grand Duchess, Russia 1914 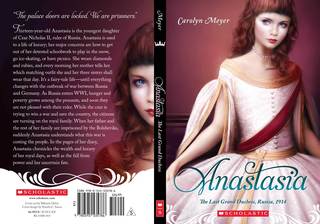 ANASTASIA: A popular story in a bright new package
The popular Royal Diaries series was launched in 1999 with authors like Kathryn Lasky and Kristiana Gregory, who wrote about Queen Elizabeth and Cleopatra. My first book in the series, ISABEL, JEWEL OF CASTILLA, came out in 2000, followed by ANASTASIA.

I quickly learned that writing a fictional diary is tricky, quite unlike a novel with a first person narrator, which is more like an autobiography or a memoir. The difference is that the diarist has no idea what's coming next in her life; she is in the moment. The memoirist is looking back over the events of her life; she is telling us how she got from there to here and recalling what happened along the way.

The guidelines for writing the Royal Diaries were strict: each entry must be less than three pages, and could be only limited use of dialogue, more common in a conventional novel than in a "diary." This forced me to learn a lot about pacing as I worked on ANASTASIA, ISABEL, and my third Royal Diary, KRISTINA OF SWEDEN.

ANASTASIA has been successful since its publication, and now Scholastic has reissued it in a new paperback format with a very different look to the young duchess on the cover. Thirteen years have passed since the youngest daughter of the Russian tsar made her appearance, and it will interesting to see how she fares today.
2 Comments

Wow, she looks like a doll! I do like the hardcover, however...that girl looked more realistic and that's who's going to my future daughter!

Can't wait to see your next book!

I agree that she looks very doll like. The covers (I've seen the Marie Antoinette one too) are very pretty, but I feel like the old ones seem more 'diary-ish' and fit the feel of the series. Still, props to the artist!