Through a fresh, modern voice, Mary Stuart, Queen of Scots, is presented as a fascinating, headstrong, multidimensional woman who struggled to hold the fraying threads of 16th-century Scotland together. Pledged to be married to the French prince, Mary leaves Scotland at five years old. Vivid descriptions of her education and socialization at the French royal court display the author’s extensive research. Tragically widowed as a teenager, Mary returns to Scotland to reign and remarry. But the only good to come of her marriage to immature and selfish Henry Stuart is an heir–her son James. When Henry is murdered (in a plot of which Mary claims to know nothing), the world watches to see if she will punish those responsible. Rumors fly that she ordered the killing, and imperial and public opinion turn against her. Mary flees to England to seek aid from her cousin Queen Elizabeth I, but she finds family ties mean nothing. The last 19 years of her life are spent in various prisons where she suffers ill health, waning support, cruel jailers, and, finally, a death warrant signed by Elizabeth. An executioner’s axe ends her life. The scheming and rivalries of Scotland are covered in such a way that the novel makes complicated history accessible and intriguing. Overall, this book portrays Mary in a sympathetic light, emphasizing her spirit and tenacity.

"If the life of Mary, Queen of Scots—so unlucky in love and the victim of so much political dirty dealing—was a work of fiction, critics would pan it for being overly dramatized. As Mary relates in this entry in the Young Royals series, the happiest part is her childhood in France, where she was sent for protection against scheming Scottish villains. Returning to rule at age 19, Mary’s downward trajectory is fueled by treacherous husbands, Reformation politics, and the ruthless greed of those around her. Might she have outmaneuvered the plotters? Readers will wonder as Mary tells her side of the lively, tragic story."

THE WILD QUEEN: The Days and Nights of Mary, Queen of Scots 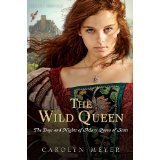 In hardcover and e-book

AT THE CENTER OF DISASTROUS EVENTS

The midnight hour being well past, the day is now Wednesday, the eighth of February, 1587. The sound of hammering in the great hall of Fotheringhay Castle has not ceased. In a few hours the most important day of my life will dawn. I have written letters to those I love. My red petticoats and my black gown lie ready. My women, dressed in black, sit with me, and I ask one of them to read aloud the story of the good thief crucified beside our Lord.

When she has finished, the women are weeping. "It is true that the thief was a great sinner," I remind them, "but not so great as I have been."

I lie down and close my eyes, though I have no wish to sleep. Outside the door of my dreary chambers, the guards tramp back and forth, back and forth, stationed there lest I try to escape. They need not worry. My body remains here, but my thoughts have already flown away, back to my earliest beginnings and all that has followed.

I was the cause of my father's death....