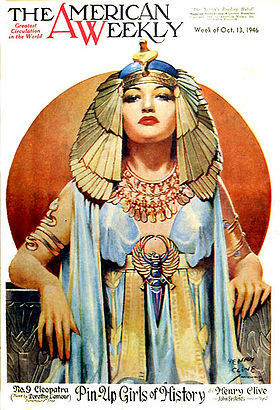 Cleopatra as cover girl on The American Weekly, 1946 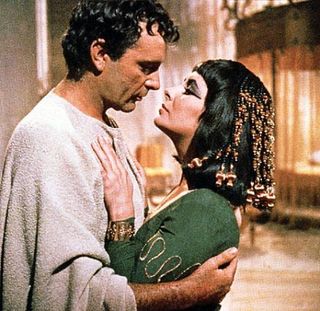 Richard Burton and Elizabeth Taylor in the 1963 movie. Did they really look like this? 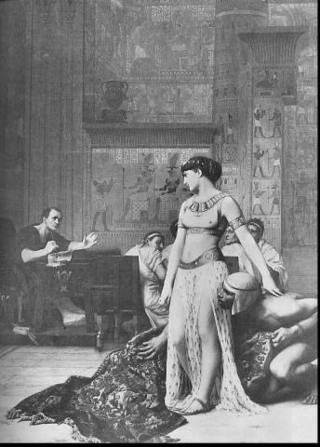 Cleopatra meets Caesar. Find this scene in the book! 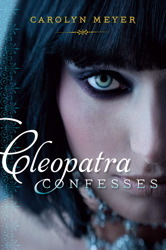 In paperback and e-book

Is this a WOW cover or what?

It is the first century B.C. Cleopatra, the third of the pharaoh's six children, is the one that her father has chosen to be the next queen of Egypt. But when King Ptolemy is forced into exile, Cleopatra is left alone to fend for herself in a palace rife with intrigue and murder.

Smart, courageous, ambitious and sensuously beautiful, she possesses the charm to cause two of history's most famous leaders to fall in love with her. But as her cruel sisters plot to steal the throne, Cleopatra realizes there is only one person on whom she can rely--herself.

PUBLISHERS WEEKLY
Before she was a queen, Cleopatra was a girl, and Meyer's incarnation of the future monarch longs to be treated as normal—wandering the marketplace, learning to dance—even as she secretly hopes to someday rule Egypt. Meyer's short chapters can occasionally make the narrative feel choppy, but her lush, detail-rich prose ably evokes Cleopatra's life as a young princess, beginning at age 10 and continuing on until she turns 22. During this time, readers are treated to royal intrigue and the cutthroat politics of Cleopatra's two older sisters, Tryphaena and Berenike, who are desperate to prevent Cleopatra's rule, since she is the favorite daughter of their father, King Ptolemy XII. This is sibling rivalry at its most vicious: crossing her sisters could cost Cleopatra her life, let alone her throne. The arrival of Marcus Antonius midway through the novel (and later of Julius Caesar) provides only the briefest hint of romance—Meyer (The Bad Queen) roots her heroine squarely in the realm of politics. Narrating with the poise and confidence of a born leader, this Cleopatra should win readers over.

SCHOOL LIBRARY JOURNAL
Gr 7 10—This fictional memoir of Egypt's alluring, mysterious queen resonates with historical authenticity, plausible emotional dilemmas, and passion for power and survival. Living among a cast of both historical and fictional characters, Cleopatra narrates her story from age 10 in 59 BC to her death at age 39. A Greek descendant of Alexander the Great, she is portrayed as a keen observer of her father's oppressive rule and unpopular submission to Rome; as an intellectual who studies the papyrus scrolls in the Library at Alexandria and learns the language of the Egyptian people; as a patient, shrewd competitor among her siblings for Ptolemy XII's throne; and as an adolescent who seeks friendship on her own terms with Charmion, a loyal court dancer who later reveals their shared lineage. Key events in history are captured in this riveting, personal tale that seeks to fill gaps in documentation with realistic dialogue, descriptions of daily routines, daring marketplace adventures, royal excursions up the Nile, and poignant reflections on the fear and anxiety of living among a ruthless, ambitious family. Readers will savor the angst and "confessions" of an adolescent Cleopatra who secures a place in history as a charismatic, determined royal who raises an army against her brother after being banished from Egypt and who forges political and romantic liaisons with Julius Caesar and later Mark Antony to save Egypt and herself. A rich assortment of characters, places, and events is woven into this appealing, well-paced, informative examination of Cleopatra's dramatic life and times.—Gerry Larson, Durham School of the Arts, NC

A king cobra at the Albuquerque Zoo

Cleopatra often wore a uraeus, the upright form of a cobra, symbol of royalty, on her forehead. Here's a photo of a real one, new to our zoo.

From Chapter 4, after King Ptolemy's return:

Each night, Father entertains his friends at a banquet with feasting and music. I attend the banquets, but still I do not get to see him alone. I know it is not my place to speak to him first. When another day passes without a summons from my father, I decide to pay a visit to my sisters. Usually I try to avoid such unpleasant visits. But I can often learn from them.

I find Tryphaena and Berenike lounging in the garden under the spreading branches of an old sycamore. Water trickles through a series of bronze bowls, placed one beneath the other, and into a pond that is home to a number of fish. A trio of cats sit by the pond, ignoring the flickers of orange and yellow among the water lilies. A servant stirs the sultry air with a fan of ostrich feathers. A young girl kneels nearby with a platter of dates. My sisters are sipping from silver goblets.

"It seems we have a visitor," Berenike drawls. "Do join us, sister."

I sit down on a marble bench, and Tryphaena signals the servants to bring me a goblet. "So?" she asks, arching her eyebrows, which have been plucked into a fine line and blackened.

Berenike stuffs a date into her mouth and licks her fingers. "Why shouldn't he?"

"I thought perhaps the voyage might have tired him," I suggest.

"It's not as though he had to row, Cleopatra," she sneers.

A servant fills my goblet from a pitcher of sweet pomegranate juice. From the corner of my eye I catch a flash of color, the quick swipe of a paw, a splash of water. The cat cleans her whiskers, appearing unconcerned. That is how my sisters would like to see it happen with Father, I think. A sudden disappearance.

"Have you any idea what Father has done?" Berenike asks sharply.

I dislike admitting that I do not. "He hasn't spoken to me as yet," I confess. The edge in her voice worries me.

"He hasn't spoken to us, either, so we have no idea what agreement he made with the Romans. But he can't keep it a secret for long." Berenike glances at Tryphaena. "We have spies, you know." She leans toward me, eyes glittering. "They're everywhere. No one can keep secrets from us--not even you, Cleopatra."

I consider myself warned. I drain my goblet, and having learned nothing of interest from my sneering sisters, as soon as I can get away from them, I do.

I sense treachery in these two. I cannot bear to be near them.